I have just added sensory bands to my list of things to make.

Apparently they help people with severe dementia find a bit of comfort and distraction.  Dementia is probably my biggest fear. I dread the possibility of growing old and confused.  Not knowing what’s going on or what I’m doing, being constantly lost and unable to communicate. I can’t imagine anything I’d hate more.  Anything that helps people in that condition find a few moments of peace has to be a good thing.

Normally I’d wait to post until I’ve at least started a project, but this is a new appeal and they need more people to join in, so please, if you knit think about giving this a try.  Actually, I’m sure crochet versions would be just as good so if you crochet maybe you could consider it too. It’s super easy – just a tube with random bits of stuff attached. 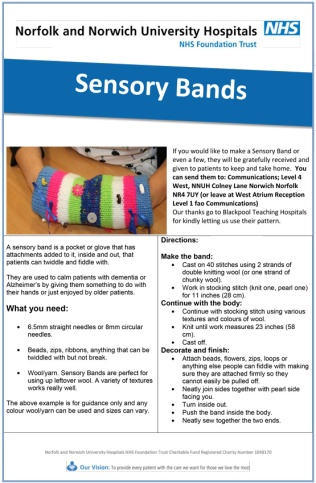 You can find full details of the appeal online at http://icenipost.com/knitters-wanted-an-urgent-call-to-help-dementia-patients/

I loved the Firefly series and have been thinking about making a Jayne Hat for ages.  Today I finally did 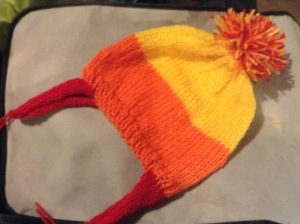 And since I’ve been asked for instructions here’s how I did it.

You need a ball of red, orange and yellow wool.  I just used cheap basic DK because I am a cheapskate and was just playing around but posh stuff would probably make it nicer.

I used 6.5mm needles.  If you’re so inclined you could use dpns and knit in the round, but I just went with what I had handy.

Start with the basic hat.

And that’s it.  Your cunning hat is now ready to wear.

I’ve been doing a bit of knitting. 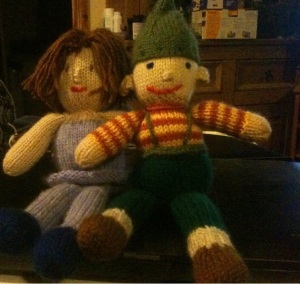 They’re based on the Rufus the Leprechaun pattern which I found online.  I changed the colours, lost the beard and added a skirt, wings and hair for the fairy and big ears and a pointy hat for the elf.

I had a terrible time with the scalloped edging to the fairy skirt, but I got there in the end by mingling together various different patterns I’d seen online.  It sort of works if you don’t look too closely.

Anyway, they are off to their new owners tonight (a young brother and sister I know through my part time job) so hopefully they will get lots of loving and no picking over the details.